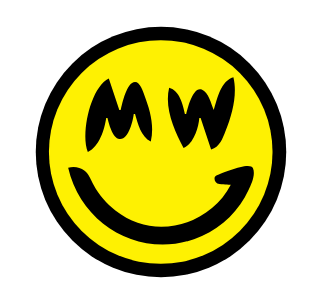 Grin is a lightweight implementation of the mimblewimble (MW) protocol. Released 15th Jan 2019, it’s basically a cryptocurrency worth watching, but not necessarily worth buying. Let me explain.

There is no doubt that Grin uses promising technology, has a skilled developer team, and does not seem to be just the next big scamcoin. It’s more similar to Bitcoin or Monero in their early days. At the core of Grin is mimblewimble, which is a novel way of keeping a distributed ledger that is not fundamentally traceable in the way Bitcoin or Litecoin are*. If the cryptography behind MW is sound, I think it’s highly probable that Satoshi would have used that instead of the current “chain of signatures” model. This is not true for any other coin, IMO, as e.g. Monero or Zcash make much more significant trade-offs in terms of the complexity of the protocol. 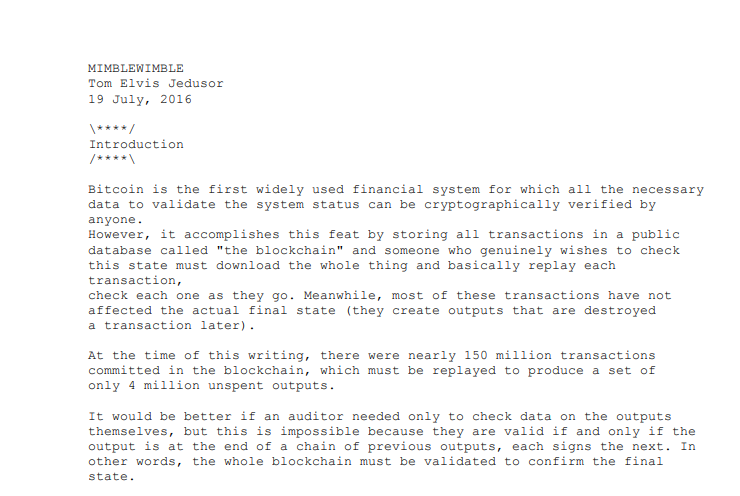 Excerpt from the mimblewimble white paper. Published anonymously – just like Bitcoin and Monero.

Grin is not a store of value. Grin is not deflationary. Grin is a means of payment. The current community is very clear on this. They want to make anonymous transactions available for everybody. They don’t want to make early speculators rich. Bitcoin started with a very high block reward which is getting lower with time. Grin’s plan is to have the block reward be 1 coin every block indefinitely. At one block per minute that is 1440 new coins every day or 526k new coins every year. Percentagewise, the inflation will be quite low in the long run, which is strange for a means-of-payment coin. Why they don’t have percentage inflation goal is because I think the community is quite conservative, and don’t wanna stray too far off what Bitcoin does. That being said, I think it’s conceivable that they will change the inflation schedule in a future scenario if it makes the currency a better means-of-payment. This is why Bitcoin is probably a better store-of-value in the long term, but I think Grin as a lot of upside for a speculator in the short term.

Bitcoin, Monero, and even Ethereum saw a spike in prices once they found a use case beyond speculation. Bitcoin with The Silk Road, Monero when some dark net markets started accepting it, and Ethereum with the ICO craze. I think this fact makes these three currencies stronger than all those who rose only due to the crypto bubble of 2017. Most of those coins have no use case, and low value proposition even if they get a use case. Grin, however – being the prominent mimblewimble coin – might experience a spike similar to Monero if, say, a dark net market starts accepting it. Grin is, AFAIK, “underhyped” – meaning it deserves more attention than it currently has, especially relative to other coins out there. That’s why I think Grin has a huge possible upside when the next hype cycle comes around. While other coins will probably double, or even quadruple, Grin will in my estimate** grow ten-fold. 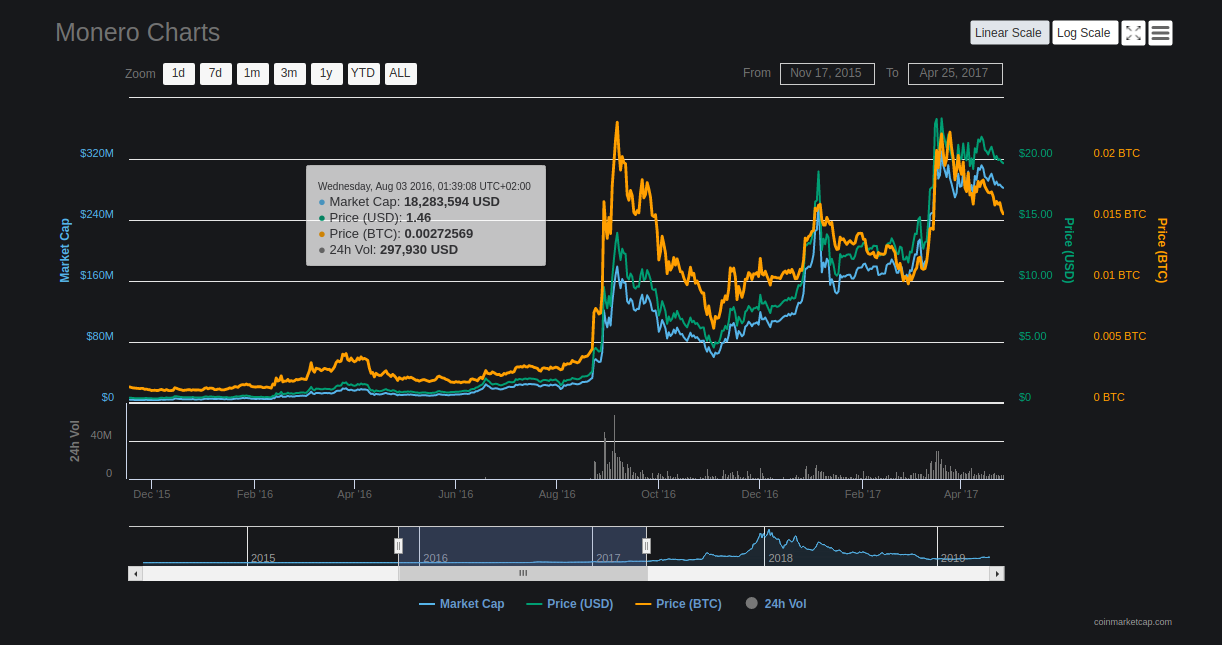 Say you’re the owner of a popular dark net market. Wouldn’t it be genius to accumulate a ton of Grin, wait for major exchanges to list it, then start accepting it on your site?

Both Bitcoin and Monero were around for more than 2 years before Silk Road and Alphabay, respectively, started accepting them. Assuming the same timeline for Grin, some dark net market will start accepting it some time in 2021. Maybe the 2 year gap from launch to some adaption is a good rule of thumb, but it’s a fragile model, as nothing is certain and anything can happen. For all I know, Monero can implement mimblewimble themselves.

Grin is currently valued at 2-3 USD. It is not listed on many exchanges, which is a good thing if you invest in it, as I would assume the price will rise as soon as more mainstream exchanges start listing it. I’m pretty sure the price will spike, as I think there are more potential big upsides than downsides for this coin. Examples of upsides for Grin could be listing on more exchanges, adoption by a dark net market, Elon Musk tweeting about it, or something else. Who knows? I don’t really the value sinking much more for a coin with a solid team and community behind it. Even if the overall crypto market tanks, this particular coin is isolated as it has not yet been overvalued by previous hype cycles, and its holders of last resort are probably quite zealous. However, it’s completely imaginable that the value will sink below as 1 USD before it eventually spikes. Only speculate if you can handle that scenario. But if you’re convinced to speculate in Grin, don’t try timing the bottom, as that is completely unknowable and you risk missing the upturn. 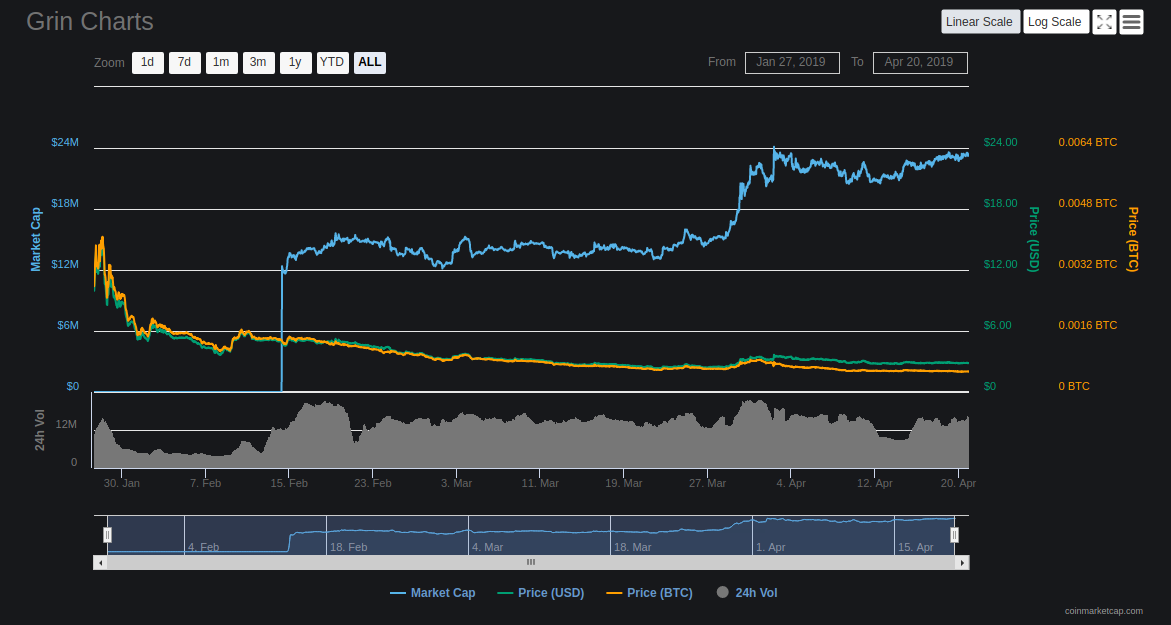 Ignoring the first tumultous days, the Grin price has been quite stable. I expect a spike to come around.

What about other mimblewimble coins? I’ve seen other MW coins just when researching Grin, such as Beam but did not pay them attention. My gut feeling tells me they’re just the next iterations of Litecoin and Dogecoin, i.e. shittier versions of the high-quality coins like Bitcoin and Monero. A simple rule of thumb I use: the fancier the coin’s website, the scammier it is.

I will now go on rambling my moralistic advice to you. Feel free, even encouraged, to skip the last paragraphs.

If you made it this far and wanna invest, please consider making a donation to the developers behind Grin. They are talented, no-nonsense individuals who choose to work on making an awesome currency when they could be selfish and just create a scamcoin or take a high paying jobs as rockstar tech people. Grin has no premine, no ICO, no sponsorship, no “most favorable exchange”, no bullshit – even if you disagree with their philosophy you must give them that. Check out their website, Twitter and IRC. I pledge to donate, before buying, 10% of whatever I buy Grin coins for to one of their community initiatives or developers. You can even buy swag with Grin on the charity store https://tmgox.com/.

As of writing this, I don’t know how to buy Grin yet. I wanna run a node and buy using atomic swaps with bitcoin via Vault713. Even if you’re not technical, take the time and educate yourself about the basics. Read, watch videos, ask questions, install it – learn whichever way you feel like. You don’t get rich by sitting on your ass using custodial wallets. Take care of your keys and minimize use of exchanges. Many would be millionaires from Bitcoin’s early days can testify to that.

TLDR; Grin is probably not store of value, but I expect to see its price spike 10-fold within 3 years.

* Disclaimer: I have not read the mimblewimble whitepaper – which is why I don’t discuss details, but I have heard a couple of podcasts about it, and read the guides on Grin’s Github wiki. ** Disclaimer: What I call estimates are just gut feelings and made up numbers pulled out of my ass.

PS: I’m a Bitcoin semi-maximalist. I don’t hold any strong feelings, but I subscribe to the advantages of Bitcoin’s network effects and its stellar community and developer team. But I think there are real scenarios where Bitcoin falls short and risks losing some of its value and/or market share. The reason is because some other currencies have (i) lower transaction costs (Litecoin, BCash), (ii) more privacy (Monero, Grin), or (iii) more expressability (Ethereum, Tron, Dfinity, Tezos, Stellar, Cardano, and so on). If you as a hardcore maximalist have a problem with how I pay for my LSD, fuck off. I use Bitcoin as a SoV, too.

PS2: This is not investment advice (whatever that means) and you may lose all your money. Anyway, I expect you will donate to me if investing in Grin makes you rich. Thank you.

Written by Viktor Frede Andersen. You can reach me on Twitter @vikfand